On any one night in London, there around 700 people sleeping in the city’s streets. Rough sleeping is a risky decision – and almost always the choice of the most desperate. Yet the response of the state – and our society – is surprisingly hostile.

Rough sleeping – and homelessness more generally – are on the rise. But austerity measures have made things worse, by cutting funds to vital support services. On top of this, rough sleepers have good reason to fear abusive behaviour from passers-by. Shockingly, this has even included physical attacks, resulting in documented deaths.

But beyond the discomfort, the abuse and the absence of social support, there is another factor making life even more difficult for those sleeping on the streets. The very shape of our cities has started to reflect our hostility toward the homeless, in the form of design elements that prevent them from seeking refuge in public spaces. This phenomenon is known as “defensive architecture”.

Defensive architecture can involve gating off the doorways and left-over urban spaces, which provide some refuge for those who have to sleep rough in cities. More insidious is the use of small metal spikes to make surfaces impossible to sleep on. Seats are designed to slope; dividers are used to prevent people lying down; walls and paving are designed to be uncomfortable. Other examples have included shower rails which drench anyone using an enclave as a temporary refuge and music to make sleeping impossible.

There has been some backlash against these techniques: Bournemouth council was recently petitioned by more than 4,000 people over its use of bagpipe music, which was played at night to deter rough sleepers. And one notable case involving the use of small studs on a pavement outside Selfridges in Manchester quickly became infamous, after a long list of signatories penned a petition against the use of such techniques. 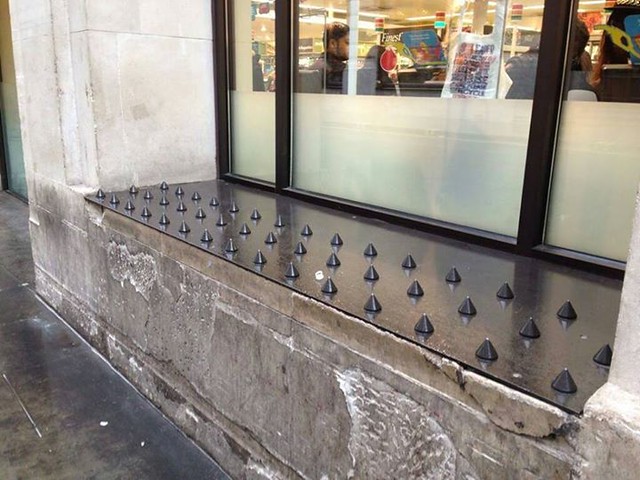 It is important to ask why so much effort is being taken to exclude the homeless as we “regenerate” city centres. Damage is not done to property or street furniture, and those sleeping rough move on in the morning. Visible city centre locations can provide relatively safe places to sleep for those unable to access temporary accommodation such as shelters and hostels. Designing out homelessness appears to be part of a wider ambition to make consumers and investors feel secure, while avoiding direct human intervention.Yet numerous examples of these different varieties of defensive architecture continue to spring up in our cities. They are used – often in subtle ways – to guide, cajole or remove people who are unwanted in such spaces. Indeed, anti-homeless designs tend to go unnoticed by most people; its discomfort only apparent to those who are being excluded.

Defensively designed street furniture and urban surfaces are routinely deployed to keep skateboarders away by day and exclude the homeless at night. It provides a cheap alternative to investing in more appropriate and humane responses to homelessness, such as shelters, social services and police action. Sadly, this is just the most recent iteration of a long history of defensive urban designs.

The wealthy and privileged have long sought to exclude people and activities that they perceived as a threat through gated settlements and private communal gardens. In the 18th and 19th centuries, iron railings were used to enclose London’s garden squares, allowing views into the open space and access for residents, while keeping the public out. Similarly, the move to suburbs offered more socially sanitised spaces that were distant from the pollution and perceived danger of inner-city areas.

In recent years, there has been a resurgence of defensive urbanism, in the form of gated residential and commercial development and tightly controlled and privatised public space. Growing social inequalities create a nurturing environment for these architectures of protection, control and exclusion. Homelessness, of course, continues – but in places at some remove from urban consumers.

The kind of changes we describe here say a lot about us as a society. But more, perhaps, about the lack of accountability and mentality of those managing public spaces in the name of corporate owners and municipal authorities seeking to create “safe” spaces.

The new defensive architecture is covert in its capacity to exclude – designed so that “legitimate” users can enjoy a seemingly open and inclusive urban environment, unimpeded by the sight of the needy or the damaged. Superficially, stainless steel studs and spikes appear to offer edgy urban design.

It is an indictment of our communities that we have come to identify street homelessness as a form of “disorder” – a sign that something is amiss or dangerous in our public spaces. Yet the reality is that these kinds of design and security measures are put in place because of the breakdown of these very communities. Designs are used to remove those who have become disconnected and excluded from society and its support systems.

Meanwhile, systems of care have been filleted by politicians and managers, who argue that cuts to public spending and crucial services are primary goals for government in the “age of austerity”. Were we to find ourselves unfortunate enough to be looking for a space to sleep or a bed tonight we would surely hope for better treatment than this. We might learn something from the benevolence of some wealthy members of our society. But surely, we need a more systematic and humane approach, to help the most desperate among us.

An Interview with Street Artist, Hula

You would never guess from Hula’s teenage affinity for tagging abandoned couches in his hometown on Oahu, Hawaii that he would someday become the thriving Brooklyn-based visual…