Kendrick Lamar’s Pulitzer Prize win is a major milestone for hip-hop, a genre that celebrates its 45th birthday this August.

It’s also a triumph that many, a mere decade ago, would have never predicted. As someone who teaches and studies the politics of hip-hop and rap, I was pleasantly surprised myself.

I thought of hip-hop’s early years, when some were adamant that the genre – disparaged as “pornographic filth” – would be a flash in the pan.

It was no fad, however; its music soon gained more and more mainstream acceptance. In response, many people – from parents, to politicians to community leaders – would criticize the art form and seek to suppress it.

The story of hip-hop is one of rebellion, attempts at censorship and, finally, artistic acceptance.

Hip-hop traces its roots to the Bronx in the early 1970s. At first, rap music – with its focus on rhymed storytelling – didn’t play a big role. Instead, there are at least four traditional elements of hip-hop culture: DJing, graffiti art, breakdancing and emceeing.

Today, however, rap is the most prominent feature of hip-hop culture. The central tenet of its style – rhyming over beats – can be traced back to the political poets of the Black Arts Movement, with lyricists like Gil Scott Heron using their voices as a form of resistance in the early 1970s.

Rap wouldn’t receive commercial success until the Sugarhill Gang’s “Rapper’s Delight” (1979). Later, Kurtis Blow’s “The Breaks” (1980) also reached the Billboard Hot 100, peaking at No. 87 and No. 4 on the Hot Hip Hop/R&B Chart, and this was followed by the first political rap song – 1982’s “The Message” by Grandmaster Flash and the Furious Five.

‘The Message’ by Grandmaster Flash and the Furious Five.

While rap music often explored important issues like the trauma of poverty and addiction, the lyrics also depicted violence and veered into misogyny. As rap’s popularity grew, so did criticism – both inside and outside of the black community.

“We will not stand for vile, ugly, low, abusive and rough music,” he said.

“What do you think Dr. King would have to say about rappers calling black women bitches and whores?” she wondered in 1996. “About rappers glorifying thugs and drug dealers and rapists? What kind of role models are those for young children living in the ghetto?”

In other instances, the courts tried to intervene.

A Florida U.S. District Court ruled that Luther Campbell and 2 Live Crew’s 1989 album “As Nasty as They Wanna Be” was legally obscene, and a number of Florida record stores were banned from selling it. Members of 2 Live Crew group were later arrested for performing songs from the album in Broward County, along with store owners who continued to sell it. The 11th Circuit Court of Appeals eventually overturned the ruling on the basis of freedom of speech. 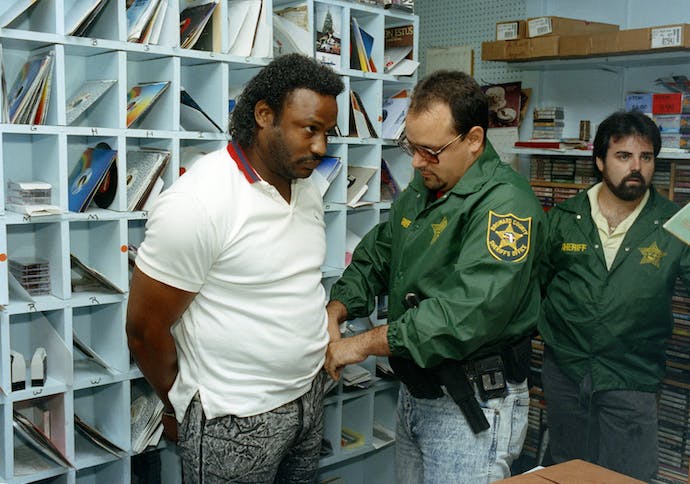 Record shop owner Charles Freeman is handcuffed after selling an undercover detective a copy of 2 Live Crew’s album ‘As Nasty As They Wanna Be.’
Doug Jennings/AP Photo

A big focus of critics were anti-police lyrics, which started to appear most prominently in the late 1980s. Many described the police harassment, racial profiling and police brutality that plagued inner-city neighborhoods across the country.

However, the lyrics of the group N.W.A. attracted the most attention – specifically, their song “Fuck tha Police,” which directly denounced the police in unequivocal terms.

Police unions denounced the song’s lyrics; some departments refused to provide security during N.W.A. shows, while the FBI sent a letter to the group’s label, Priority Records, calling the lyrics “discouraging and degrading to these brave, dedicated officers.”

Because of these headline-grabbing controversies, it was easy for critics to discount rap as a nihilistic genre that wallowed in misogyny, self-harm, and violence.

Often overlooked was the way rap music resonated with marginalized, alienated inner-city youth by detailing their daily lives in ways most media outlets wouldn’t – or couldn’t.

Chuck D of Public Enemy called rap “the invisible TV station that black America never had.” Los Angeles Congresswoman Maxine Waters was one of the few politicians who recognized its power. In 1994, she came to rap’s defense.

“It would be a foolhardy mistake,” she said, “to single out poets as the cause of America’s problems. … These are our children and they’ve invented a new art form to describe their pains, fears, and frustrations with us as adults.”

That same year, American Studies scholar Tricia Rose published her seminal study of hip-hop culture, “Black Noise.” She was the first academic to explore the complexities and positive contributions of the genre in a book-length format.

And then there was the simple fact that Americans loved rap music: By the 1990s, it had become the most popular genre on the Billboard Hot 100.

Nonetheless, perhaps because of its reputation, traditional venues were hesitant to embrace rap.

The Grammys have a contentious and inconsistent history with rap. The first hip-hop-themed award was “best rap performance,” presented to the rap duo DJ Jazzy Jeff and the Fresh Prince in 1989 for their song “Parents Just Don’t Understand.” However, the Grammys didn’t air this award during the show’s television coverage – a decision that compelled some hip-hop artists to boycott the ceremony.

In 1993, rap group Arrested Development was awarded the best new artist. Two years later, the Grammys recognized female hip-hop artists for the first time, with Queen Latifah and Salt-N-Pepa each winning an award. But only two rap albums have won the coveted album of the year: Lauryn Hill’s “The Miseducation of Lauryn Hill,” which was categorized as a R&B album, and Southern rap duo Outkast’s “Speakerboxx/Love Below.”

Rap gets an ally – in the White House

Today, many of the same dynamics are at play. Police brutality is still a common theme of rap music, Kendrick Lamar’s work included.

The criticism hasn’t abated, either. On a June 29, 2015 segment of Fox News, host Geraldo Rivera criticized “Alright,” arguing that “Hip-hop has done more damage to young African Americans than racism in recent years.”

Despite a drumbeat of criticism, hip-hop has been increasingly recognized by other mainstream award shows. Rapper Eminem and the rap group Three 6 Mafia have won Oscars. Hip-hop artists are also being voted into Rock and Roll Hall of Fame, with Tupac the most recent rapper to join the ranks. In 2017, the Kennedy Center Honors recognized rapper and actor LL Cool J, the first time they’ve honored a hip-hop artist.

President Barack Obama played a big role in the genre’s acceptance. Even before he officially announced his candidacy for the presidency, Obama held closed meetings with rap artists such as Ludacris to discuss youth empowerment.

During his campaigns and two terms, rap artists always had his ear – he’d continue to meet with them, mention them in speeches, and even host rappers at the White House.

Following Obama’s election, views across the aisle started to shift as well. In 2009, former Republican National Chairman Michael Steele tried to woo rap artists to the Republican Party. Oprah Winfrey – who had previously denounced rap music – gave her first ever in-depth interview of a rapper when she invited Jay-Z to a show that aired on Sept. 24, 2009.

Back in the 19th and 20th centuries, there were attempts to censor slave narratives; because they detailed the harsh realities of slavery in the South, critics questioned their authenticity and accuracy. Eventually, more and more recognized the value of these narratives, and the federal government dispatched writers to record the stories of surviving slaves in the 1930s.
Over the past few decades, we’ve seen a similar dynamic with rap music. While some have attempted to silence rap because of its raw portrayal of life in inner-city communities, people increasingly see its value. Like slave narratives, rap music has given an authentic and candid voice to the voiceless.

For his part in this tradition, Kendrick Lamar’s Pulitzer Prize is well-deserved.

For some, spending 24 hours without a phone or any means of contacting friends and loved ones is a daunting affair, but that is…