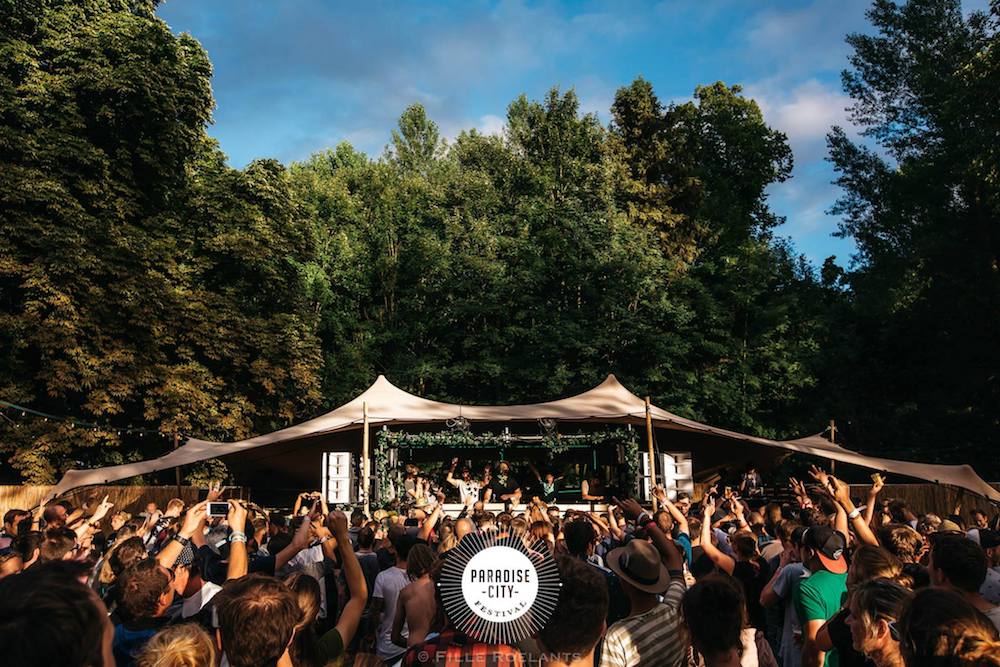 For many flocking to Castle of Ribaucourt, Perk, Belgium last Friday, this occasion was something of a pilgrimage. Like the steadily growing throng of festival goers, we had travelled for 3 hours to reach this promised land of eclectic electronic music and happy people. Expectations were high, and Paradise City Festival 2017 far surpassed them. Overall, it was the ideal mix of festival ingredients: organic, authentic, significant and surreal.

Entering the festival via the castle felt like we were entering a fairytale: a fairytale focused on environmental sustainability. With the lush stately grounds alight with the makings of a magical weekend, we picked our tickets up and entered the camping field. Met with a sprawl of cardboard structures, Paradise City is particularly special because of its eco efforts. The hundreds of Kartents are designed to leave as small a carbon footprint as possible – however difficult that is when catering several thousand festival revellers. The area was consistently maintained by a friendly litter-picking crew, which turned the space surrounding the festival into a peaceful utopia instead of the usual post-apocalyptic car crash associated with most big camping weekends.

Paradise City welcomed the finest in underground talent, including rising stars and established veterans drawn from all corners of the scene. The hand picked curation helped to drive the rhythm of the festival; the likes of taste-makers John Talabot, Acid Pauli, Âme, Andhim and HVOB bought their melodic sounds to carry the crowd along. We arrived early on Friday to catch one of our favourite producers Robag Wruhme who managed to squeeze all our favourite tracks into his set. Frankey and Sandrino and &ME kept the pace rolling later.

On Saturday whilst the sun was up (kind of), Moscoman, Jan Blomkvist, XXXY and Nosaj Thing topped the list. Armed with the festival’s contactless payment bands to keep cold beers consistently coming in, an overcast afternoon was made all the more dark and delicious with Nosaj Thing’s set of blissed out beats. This fusion of electronic hip hop played live by LA producer Jason Chung, whose career trajectory has been amplified by collaborations with Drake and Kendrick Lamar, was set against a backdrop screen of glitchy monochrome patterns and a quietly appreciative crowd. Then, Moscoman hailed in the rain as bodies packed under the stage tarpaulin with some truly pleasing deep house, weaving in world music, disco, and everything in-between.

As night fell, Acid Pauli became our muse, but we couldn’t help but feel a little disappointed with the wispy nod to ‘NaNa’, a ghostly, beautiful track which haunted our festival season of 2016 and we craved to hear bent around other sounds this year. Later, Austrian duo HVOB sent us out of shape: moody, melodic techno underscored the whispery vocals of Anna Müller. Their assured, masterful production didn’t stop us completely losing our shit.

Sunday was packed with some big names in the electronic music such as Omar S, Ame, John Talabot, Andhim, Recondite, and Denis Sulta. AME closed the festival with a set which made us sad to leave; we tried our best to hold onto these last musical moments forever, with darting bleeps and stabbing orchestral strings moving through the night sky. Our favourite distinctive tech house DJ was a force to be reckoned with, once again.

All in all, going to Paradise City festival means giving the world a big hug, and we advise you to do it too: make the most of renewable energy, smart waste management and eco-friendly catering in this future-proof heaven filled with like-minded party people.

Bestival Review 2015: We got our freak on

For its 12th year, Bestival, Curated by Josie and Rob Da Bank, offered a ‘Summer of Love’ to all festival-goers. The last big festival…